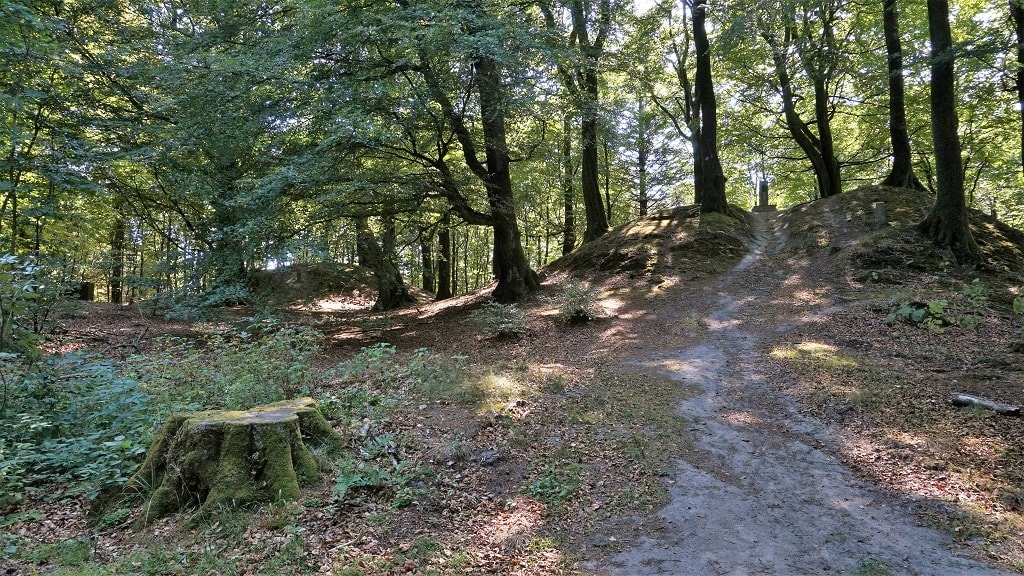 Do Denmark have mountains? They do, actually! And you can climb them in Dronninglund Storskov.

The vantage point Knøsen is placed in the forest Dronninglund Storskov and is a part of the North Jutlandic ridge Jyske Ås. With an altitude of 136 metres, Knøsen Hill is the highest point in Vendsyssel and the 5th highest in all of Denmark. Knøsen hill is registered in Bestig Bjerge.

From the top between Knøsen and Knaghøj Hill, you can catch an amazing view over the forest Dronninglund Storskov and Jyske Ås. Knøsen Hill is a popular spot among both new and experienced hikers.

Knøsen Hill is originally a barrow from the Bronze Age and originates from around year 1000 BC.

The myth tells the tale of a squire named Knar and his fellow called Knøs. When they went into the forest to watch the landscape, Knar took the highest hill, while Knøs had to take the lower one. Some doubt prevails whether Knøsen Hill was originally named Knaghøj - and vice versa. Originally, Knøsen might have been the smaller Hill 35 metres to the east, today named Knaghøj.

According to the myth, a woman named Knaghuskællingen (The Knaghus Hag), lived on the top of the hill. In the front she looked normal, but from behind, she was hallow.

In the years following 1807, the Englishmen used Knøsen Hill for signalling.

Around 1902, Lodberg, Flauenskjold and Rasmus built a tower on top of Knøsen Hill. The tower stood untill 1930, where a new tower was built. This tower was sold to the geodetic institute, but shortly after the outbreak of World Was II, the tower was town down for the sake of the German army.

The starting point for hiking Knøsen Hill is the parking lot west of the road Storskovvej.

Knaghøj is a hill placed on the North Jutlandic ridge of Jyske Ås. Knaghøj Hill is 127 metres and stands side by side with North Jutland's highest point, Knøsen (136 metres).

From Knaghøj you can enjoy an enthralling view over the beautiful nature around Dronninglund Storskov and Jyske Ås.

The myth tells us that once upon a time a woman by the name of Knaghuskællingen (The Knaghus Hag) and her son lived on Knaghøj. Knaghuskællingen looked normal in the front, but from behind she was hollow. Her son was called the Troll got angry at the Old Churce in the village of Thorup since the church bell kept on ringing in the morning, noon and evening, even Sunday morning, where the Troll liked to sleep late. So one day he picked up a great rock and went up on Knaghøj Hill. He aimed and he threw the rock - but no, he dropped it, so instead the rock slanted behind him. Today you can find the rock in Dronninglund Storskov, nowadays called Troldestenen (The Troll Rock).

When his mother, Knaghuskællingen, found out, she grounded him for seven years.

The years went by, but the son did not grow less tired of the church. When his mother finally released him, he found three rocks. He took them to the top of the hill and yet again tried to hit the church. The first rock hit the home of the scouts in Thorup Hede and is nowadays known as The Grey Cow. If you look closely you can still see the mark of the Troll's hand on the rock. The second rock hit Ringsted, a field area southeast of Thorup. The third rock hit the church and rolled to the west to the house of Wolle Peter. Source: The Scout Center of Thorup Hede (http://www.thoruphede.dk/index.php?id=117)

Knaghøj is 127 metres tall and both new and experienced hikers can access the top of the hill.

Parking is found west of the road Storskovvej.