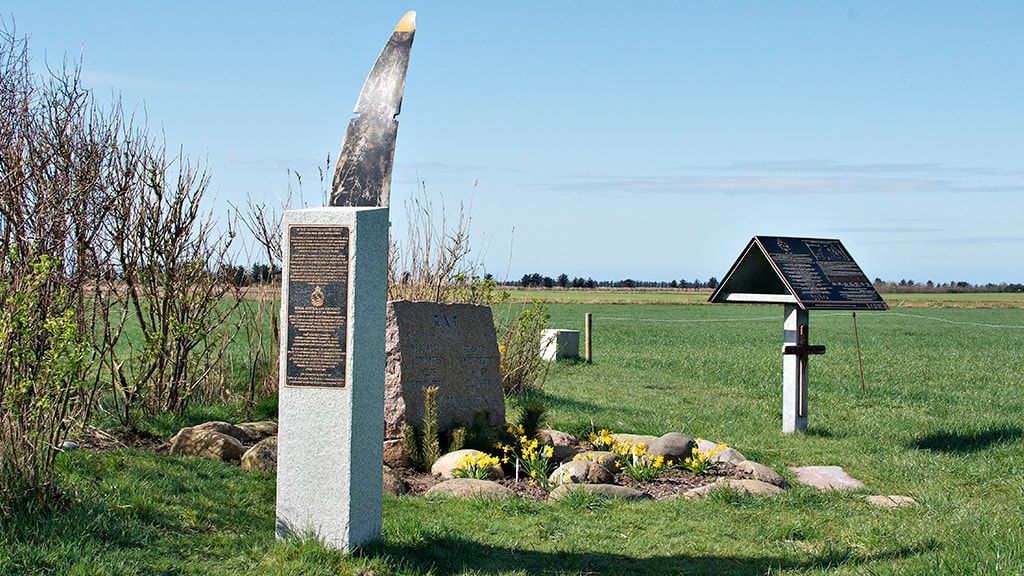 Stadil, 8 airmen. The airmen rest at the crash site. A memorial stone is near the water filled hole made by the plane south of the farm, Stadiløvej 8, DK-6980 Tim.

Stadil, 8 airmen. The airmen rest at the crash site. A memorial stone is near the water filled hole made by the plane south of the farm, Stadiløvej 8, DK-6980 Tim.
FAF: "In connection with a raid to Berlin on the night before 4 September, 1943 Lancaster EE 138 was hit and caught fire over the western part of Jutland. The plane crashed west of Stadil and exploded, when it hit the ground, about 400 m south of Ingemann Halkjær´s farm.

In spite of the curfew the farmer had to lead a Danish ambulance and some Germans to the crash site, which was not easy to get to.
Debris of a plane blown to pieces was found here, and a big hole already filled with water, as the site was on the edge between land and a vegetation of reeds.
I. Halkjær and others of the parish shortly after made a wooden cross, which was placed at the crash site. It read, "Memorial to allied airmen".
In 1949 the mother of one of the perished airmen visited the crash site, and when Halkjær saw how moved she was to see the simple wooden cross, he decided to start a public subscription to erect a memorial stone at the site. The vicar, the chairman of the parish council and Halkjær set up a committee.

On 5 May, 1950 they were ready to unveil the stone. Several hundreds of the local residents were present, when vicar F. Frederiksen, Stadil, starte his commemorative words to the fallen airmen. Then Ingemann Halkjær unveiled the stone with the 8 names that they had from England. (S/Ldr Kelaher´s notebook was found by the Wehrmacht at the site). After speeches by prefect A.V. Karberg, the county of Ringkøbing, and by Lieutenant Colonel Olsen, Viborg, Captain H. Bork-Larsen laid a wreath on behalf of the Home Guard. With that the residents of Stadil had given S/Ldr Kelaher and his crew a gravestone." See photos from the site here.