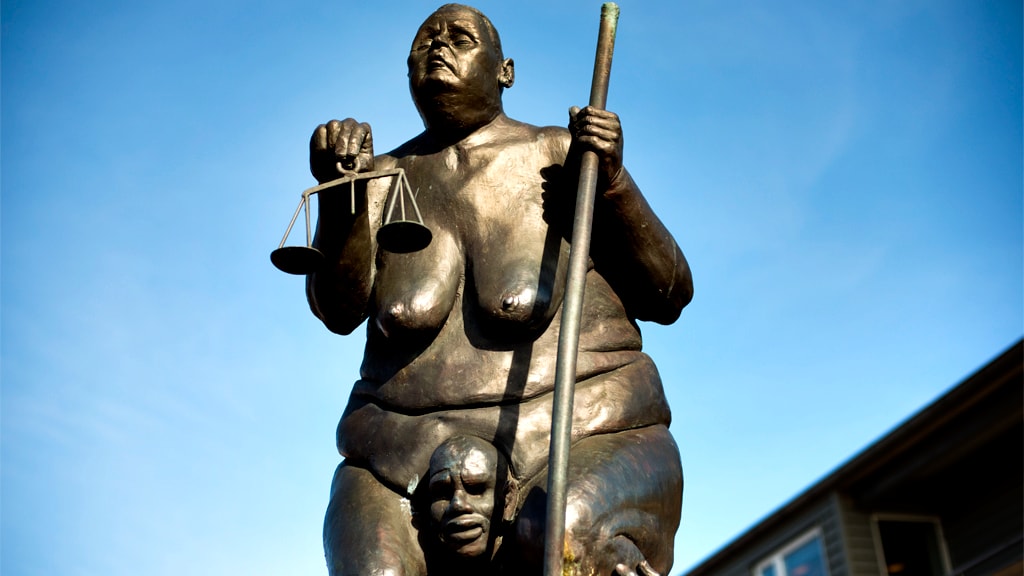 Galschiøts artwork: "Survival of the fattest"

Galschiøt’s figure: Survival of the fattest - came to the town Ringkøbing in 2006 but had to be changed so that it could handle the salty air out here and was then re-erected in the summer of 2007. The 3 ½ meter sculpture is a caricature depicting a giant western-looking woman, sitting on the back of a hungry African man. He is threatened not only by his own hunger, but also by the woman's physical abundance.

The woman holds a weight to emphasize that there is something obviously wrong with the global distribution. Jens Galschiot's sculpture is a commentary on the distortion of world trade, where the privileged part of the world with tariffs and subsidies keeps the developing countries out. "I am demonstrating neither for nor against the EU, but to bring some other values ​​into the debate," emphasizes Jens Galschiøt.”

"It is not only a shame for the poor who die of hunger. It is also a shame for us. It does something about us to look at these contradictions. We become blunt. With this figure I want to print a picture in the head of people, so they think - shut up? Is ths the way the world is. And see themselves as part of that problem. "

Galschiøt has a clear rationale for why the sculpture looks the way it does. The world has become too small to accommodate the enormous contradictions: "On the one hand, here on the northern part of the globe, we have problems with eating too much and living on fat. On the other side of the globe, people die from hunger. " That's why there are refugee flows and terrorism. In trying to shield ourselves from the problems of the Third World, we are giving up our values ​​on democracy and civilization.”