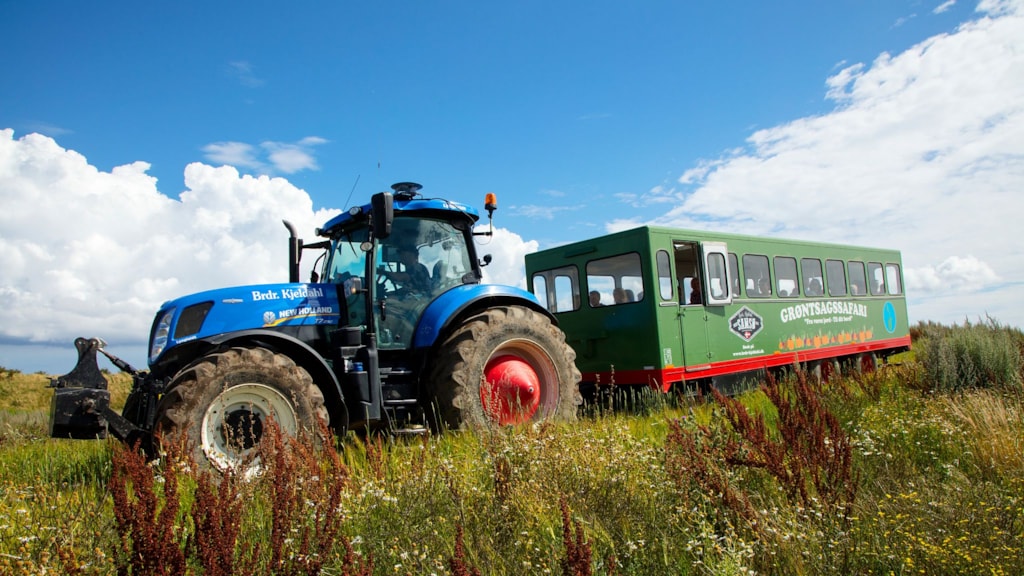 Don’t expect either lions or zebras on this safari trip, but lots of good stories and spectacular experiences of nature.

From Lug Worm to Safari Bus
Last year, the agricultural enterprise Brdr Kjeldahl from Samsø purchased a cart that was previously used as a beach vehicle named Lug Worm at Skagens Gren (northernmost point in Denmark) and later a safari bus in Knuthenborg Safari Park. ”Since the cart had already been used as a safari bus, it was quite natural to call it Vegetable Safari”, Jens Kjeldahl explains about the initiative.

And it is exactly a vegetable safari that visitors will experience. The cart is fitted with seats and large windows to make the trips comfortable on the bumpy roads and fields. Visitors have a chance to really absorb the impressions around them.

6.5 Kilometres of History-Telling
The cart is drawn by a tractor whose driver will tell the passengers all about the surroundings they pass through. ”The starting point for the safari is vegetable and agricultural production, but the guide will also comment on nature conservation, culture history, geology, ground water preservation, distribution of land, Danish history, legends, and old wives’ tales. Passengers get a lot of information during the one and a half hour trip”, Jens explains.

The trip begins at the large parking lot in Nordby from where it will go through the fields around the town. On the way, the bus makes a few short stops where the passengers, if they are lucky, may catch sight of some of the widespread game living on North Samsø. After 6.5 kilometres, the trip finishes and passengers will be let off where the trip started.