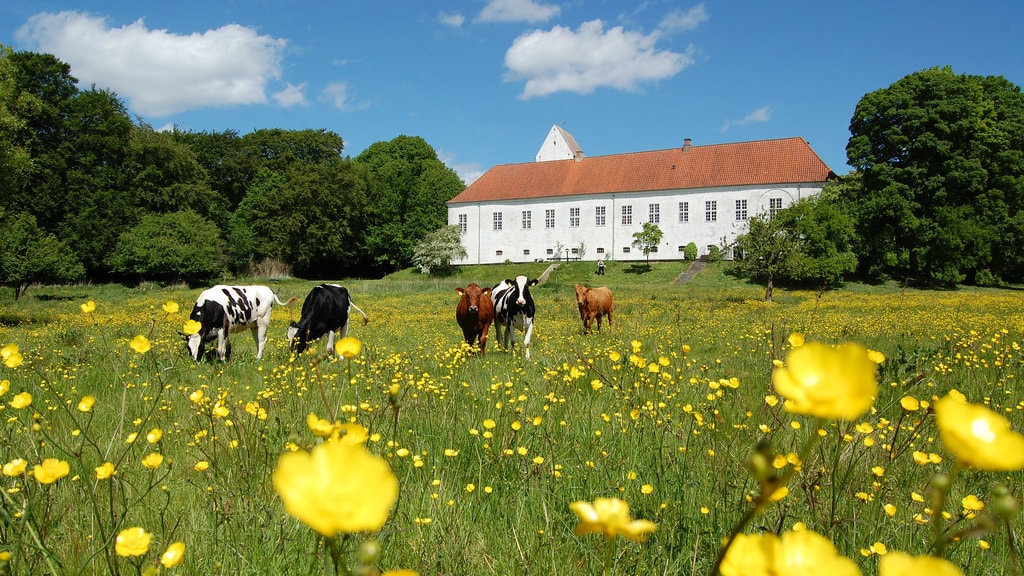 Ørslev Kloster is located near the fjord in the area between Skive and Viborg. The buildings and the area are owned by the Countess Olga Sponneck’s Trust, and Foreningen Ørslev Kloster (the Ørslev Kloster association) has right of use. Ørslev Kloster is a working retreat. Anyone who needs peace and quiet to contemplate or carry out a piece of work has the option of staying at the convent.

The atmosphere is quite unique. The convent’s workrooms are characterised by their simplicity, beauty and quietude. Here, you can seek contemplation, inspiration and concentration. Peace in your soul. The history of the last 1,000 years emanates through the rooms and the thick, shielding walls, while the age-old trees and shrubs in the convent garden serve as yet another greeting from residents past.

Ørslev Kloster is first mentioned in 1275, but it was probably founded as early as 1200, as a convent for the Order of Saint Benedict or Saint Augustine. After the Reformation, the king sold the convent to private owners, while the buildings remained in use as a convent.

In 1584, the entire property was transferred in an exchange of property to vassal Hans Christoffersen Lindenow, and in around 1700, it was in Major General Johan Rantzau’s possession. Based on the old medieval buildings, he converted the convent into a four-winged baroque building with the Romanesque chapel as the north wing.

In 1724, the convent was taken over by the Berregård family, which carried out a number of interior renovations and decorations. From 1754, Ørslev Kloster switched between various owners, and during the 19th century, the estate became increasingly run down. In 1918, it was taken over by a consortium, which divided up the land of the convent.

In c. 1934, Countess Olga Sponneck cycled past Ørslev Kloster and she fell in love with the place, which she then acquired, along with the wood and the park which still belonged to it. Olga Sponneck made it her life’s work to refurbish the dilapidated buildings. When Olga Sponneck died on 24 December 1964, Ørslev Kloster was transferred to a special trust, which was given the task of preserving the site as a baroque manor for posterity.

The preserved convents garden and forrest including a marked nature path is open to the public. In the old idyllic gardener's lodge, you will find an interesting exhibition about the convent's history.