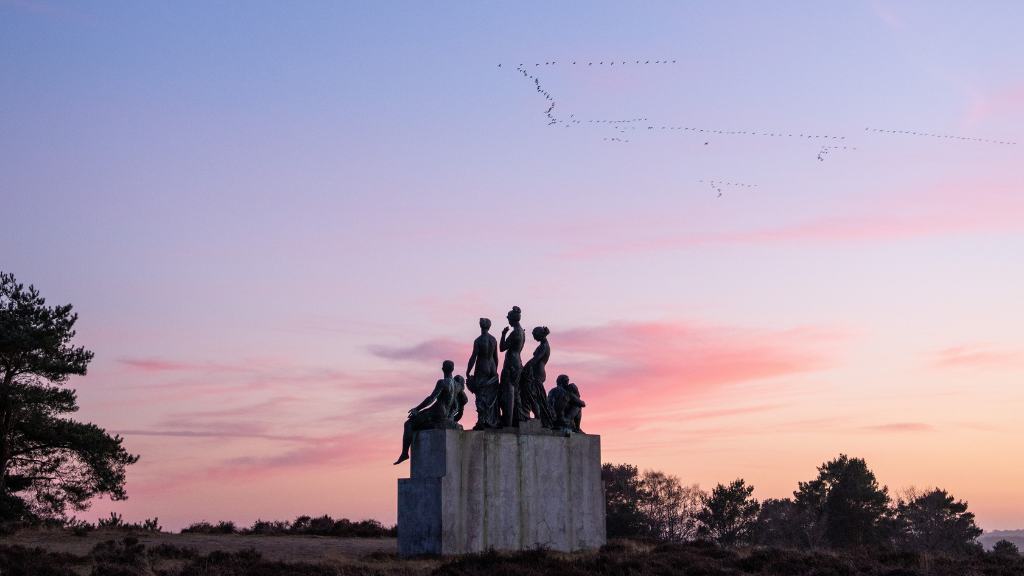 Walk around in the heathery hills between the statues of powerful men and women. Continue into the museum which resounds as a cathedral and watch the sculptor's enormous artworks in plaster, marble and bronze.

Men and women in bronze looking over the heathery hills in the park. And in the impressive octagonal room in the museum where the ceiling is 11 metres above you, you find more men and women, now in white plaster. It is a very special experience walking around in Rudolph Tegner’s Museum and the Statue Park – a calm and yet intense experience where beautiful nature and bombastic concrete architecture are combined.

A walk in Russia

The natural resort, where you find Rudolph Tegner’s statues, is called Russia. The rather special name relates to the remoteness of the place. However, from Russia and Rudolph Tegner’s Museum to the nearest town, i.e. Dronningmølle in North Sealand, is only 2 kilometres.

The museum room was designed by Rudolph Tegner himself with the purpose of housing for all his artworks. It was built in 1937-38 and when walking through the large port, you almost feel like being in a church room. The solid walls, the high ceiling and the absence of large windows make all sounds resonate between the statues.

The permanent collection counts 355 of Rudolph Tegner’s artworks. Most of them are originals in plaster, others are in bronze and marble.

Climbing trees and activities for children

Children are welcome at the museum. In the Statue Park there are climbing trees. You can also go treasure hunting or orienteering during your visit – both require that you have information about the artworks. If you want to be creative, you can visit the drawing workshop where you can try to draw the various artworks.

Activities for children all over North Sealand.

When you have walked the hills and experienced the octagonal museum room, you can visit the café where you can get lunch or get a cup of coffee. The café at Rudolph Tegner’s Museum is open in the summer half. Here they serve coffee, tea, cake, sandwiches, ice cream, etc.

Here you find the opening hours of Café Søren at Rudolph Tegner’s Museum.

One of Denmark’s great sculptors

Rudolph Tegner was educated at the Royal Academy of Fine Arts in 1893. His art was very controversial at that time. His work is intense, dramatic and huge and come under the art form called vitalism. And they formed a great contrast to other Danish sculptors such as Bertel Thorvaldsen.

In a great part of his artistic life, Rudolph Tegner lived in France and in 1916, he bought the area outside Dronningmølle where he constructed his museum. Here, he is buried together with his wife, Elna.

Get more information about Rudolph Tegner and the museum.

The museum arranges a number of events, e.g. concerts, guided tours and artist talks. A popular annual event is the so-called candlelight parties which are always held on the first Friday in September and the subsequent Saturday. They are a continuation of the parties, the couple, Rudolph and Elna Tegner, arranged in the 1910s and 1920s for artists and friends.

Get more information on events at Rudolph Tegner’s Museum.

Walk in Rudolph Tegner’s footsteps in North Sealand and Copenhagen

The Rudolph Tegner sculptures are not only to be found in the Museum in Dronningmølle. They are also found in the urban space in Elsinore as well as Copenhagen.