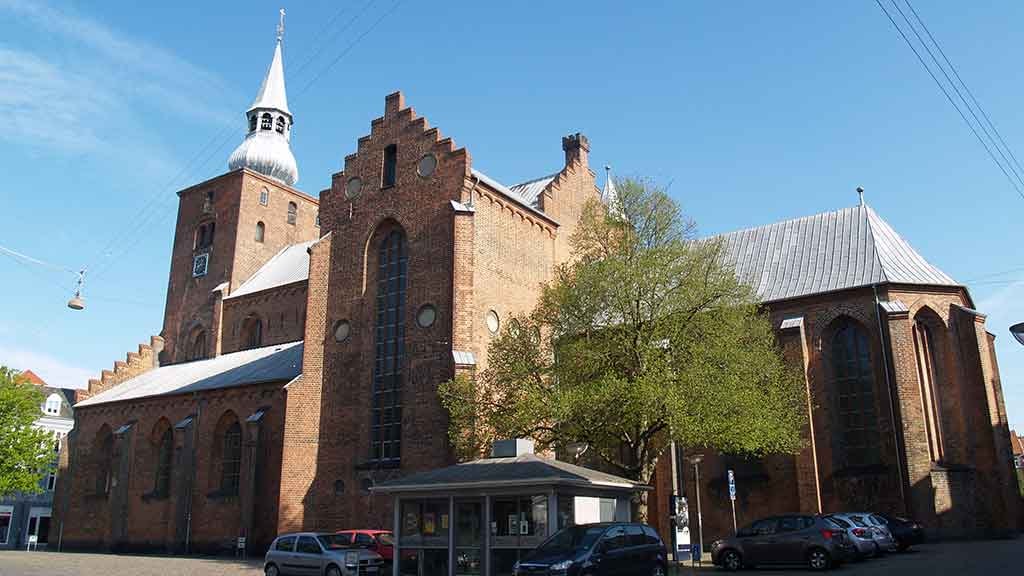 The church is the only of the five Middle Age churches in Randers that remain today. St. Morten's church built around 1494-1520 as a replacement for the earlier Middle Age church by the same name. It is an beautiful Gothic town-church. It is dedicated to St. Martin of Tours (dead year 400). St. Morten, as he is also called, was one of the Middle Age's most popular saints as he was connected to the concept of charity.

THE CHURCH INTERIOR, TOWER AND CEMETERY

The church is built in red mediaeval large bricks as a late Gothic basilica. Ever since 1534, the church has been a parish church. However, the tower with its characteristic onion steeple was not built untill 1795-97. The façade is a very beautiful baroque façade from 1751, built by the town's vice mayor of that time, Søren Simonsen. Around the church was the cemetery which was abolished in 1812 and ever since, it has been a market place. But it is still possible to see names engraved in the bricks of the church, since they functioned as gravestones.

On the occasion of the church's 500 years jubilee in 1994, the church's large organ was drastically renovated. Furthermore, a carillon was installed consisting of 49 bells in the tower's lantern. The callion plays automatically at even hours and a recital Saturday from 10.30 am to 11 am - and in connection with Christmas time. In 2004 Per Kirkeby's modern alter tableau illustrating Good Friday in Gethsemane Garden was unveiled.