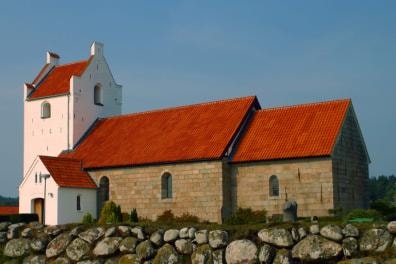 Tranum Church was built in year 1200 in a romantic style. Originally the church only consisted of ship and choir, but in 1450 the tower and vault was added and the rare old bell was established.

Compared to most churches from the Middle Ages, Tranum Church is very well kept with original windows in the northern wall of the church.

The babtistry, which have been moved from its original place to the closed women-door, is in granite and is as old as the church. As many other babtistries, this babtistry was damaged after the Reformation, where the former paint was moved. But it is possible to see a cross on the foot of it.

Altarpiece and the preacher chair are of newer date.

The church is initiated by Saint Nikolaus, who are the saint of the sailors, but also Santa Claus.