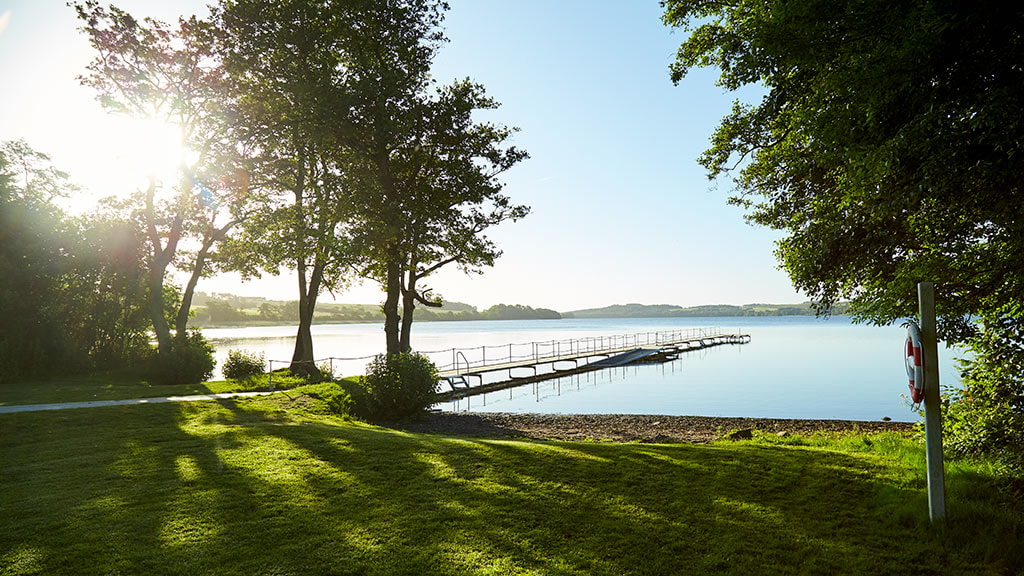 Cycling route: From the Gudenå to a bathing lake

Foto: Randers Kommune
Activities
Tour suggestions
This 44.3 km long bike ride goes along the Gudenå along the cycle path between Randers and Langå. The trip also goes to Fussingø Castle, where you can take a swim from the bathing bridge in Fussing Lake. The Gudenå is 158 km and is the longest river in Denmark.
Indirizzo

The 158-km-long Gudenå is Denmark’s longest watercourse. It rises in Tinnet Krat north of Vejle and falls into Randers Fjord. On its way water is added to the Gudenå from a number of smaller streams, and its drainage area covers a total of 2,600 km2. From way back to prehistoric times the river was the main means of transportation, because it was at that time far easier to transport goods on the waterway than on land. Many archaeological finds witness that already the Stone Age people established settlements along the river. This tour follows the Gudenå along the cycling path from Randers to Langå. From here the tour goes north to Fussingø Castle, where you can enjoy a refreshing bath in Fussing Lake.

The Gudenå and Vorup Meadows

Way back the Gudenå was an important means of transportation to and from inner Jutland, and the traffic was brisk by means of barges on the river. The barge service had its prime time in the last half of the 1800s, and horses or men on the banks hauled the barges along the so-called bargeman’s path. The cycling path, which starts at Randers Regnskov Tropical Zoo, follows the bargeman’s path on the stretch from Randers to Langå. The path goes through the lovely scenery of Vorup Meadows. There are several bird towers, from where it is possible to watch the rich bird life.

At Fladbro the Nørreå falls into the Gudenå, and at this location there has been both a bridge and an inn - Fladbro inn - for several centuries. On his great Jutland tour in 1859, Hans Christian Andersen enjoyed open sandwiches and port in Fladbro Inn. After his visit he went by carriage to Hjermind vicarage, and it was on this tour that he wrote the song “Jylland mellem tvende have”. Randers Deerpark with a fine population of deer is situated in Fladbro Forest nd the Klatreparken Randers where you can romp with wild climbing experiences under the tree crowns.

Actually, Langå is the parish in Denmark, where most rune stones have been found from the Viking Age, namely a total of six (read more about rune stones in the route "Runestones and other ancient monuments"). However, four of them have disappeared; probably they have been used as building material. One of the six rune stones is exhibited in Museum Østjylland in Randers, whereas the last one stands on the churchyard in Langå. It dates to the period 970-1020, and the writing on the stone tells that a Viking in commemoration of his brother, who was a respectable great farmer, erected it.

Ålum Church is the home of a total of no less than four beautiful rune stones from the Viking Age from the last half of the 900s. Originally they were not standing at the church, as they can be dated to the time, before the Christian faith was introduced in Denmark. This means that they were erected before the village churches were built, and probably they were originally standing along the main roads of the Vikings, where they have reminded the passers-by about the dead persons and their great achievements. The two largest rune stones stand outside the church, whereas the two smallest (which are only fragments) can be found inside the porch of the church.

The oldest part of Fussingø Castle was situated on a small cape in Fussing Lake, which is called Gammelhave today. It was built in approx. 1555, but torn down in 1794-95, when the present buildings were erected on firmer ground west of the lake. Access to the main building is only allowed in connection with special events, but the garden is open all year round. It is possible to bathe in the western part of Fussing Lake.