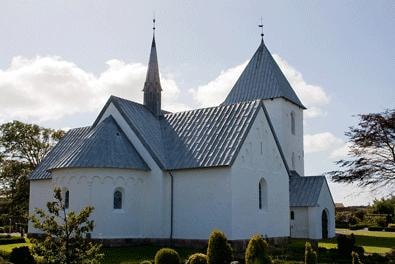 The town church in Hurup Thy was built in the 1100s, but has been changed a lot by alterations and extensions since then.

Originally, Hurup Church was without a tower and aisles.

In the church, you notice, among other things, the altarpiece, divided into four pictures, which Sven Havsteen-Mikkelsen has been responsible for. The altarpiece was inserted in 1981. The old altarpiece from around 1850 can now be seen on the wall in the organ room.

The church's Romanesque baptismal font is probably as old as the church itself.

The runestone in the cemetery outside the porch

The runestone appeared when the dike was breached to make room for a new chapel. The inscription can (perhaps) be interpreted as follows: "Thormod, a well-to-do" boy ", raised this memory after N.N. his father (or brother)."