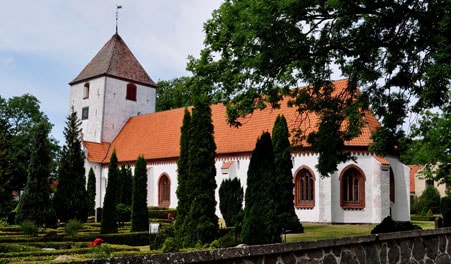 The murals in Kettinge Church are painted around 1600th century inspired by the Elmelunde Master. Mads Henriksen the artist restored them in 1897. Ketting Church is dated back from the mediaeval times. The oldest part of the present building is probably built around AD 1200-1250th centuries, in the late romantic style. Moving 100 years ahead, to the beginning of 14th century, where Kettinge Church expanded to nearly double size, it was then modernised with Gothic style tower, 6 pointed arches, and large and bright windows. Interesting assets: the altarpiece, pulpit, baptismal font, blacksmith iron door and a sacristy with a tomb stone.