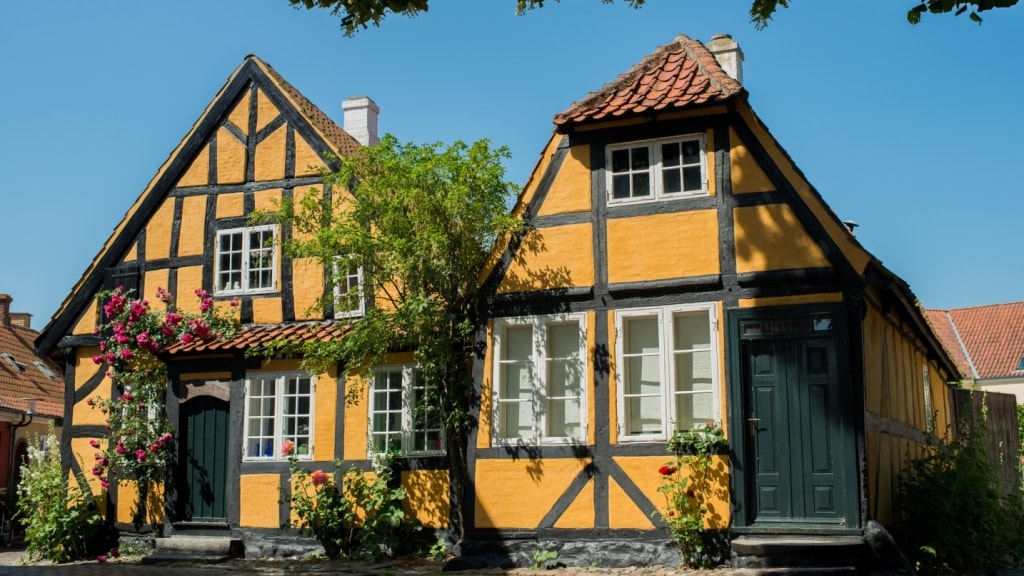 The town of Faaborg

Faaborg Shopping and City Life
The city name “Foburgh” which is believed to mean “the castle of the fox”, is mentioned for the first time in the year 1229, where King Valdemar the victorious presented Faaborg as a gift to his Portuguese daughter-in-law, Princess Eleonora. The old merchant’s city still has its original small and cosy streets that provide a glorious setting for a wide variety of shopping possibilities. And it is certainly worthwhile to explore all the specialised shops. Film about Faaborg.Films about active holiday around Faaborg.
Atmosphere
All the restaurants, cafes and the architecture of the buildings surrounding the sculpture “Ymerbrønden” on the town square, create a pleasant atmosphere. Many events take place on the town square throughout the year, featuring eg music or entertainment, resulting in an almost Mediterranean atmosphere in the idyllic merchant’s town. Find lots of information about the local eateries and delicatessen shops in the free culinary guide.
Bell Tower, City Gate and Watchmen
Faaborg’s landmark, the Bell Tower is a relic of the old Skt. Nikolajs church which was demolished in the middle of the 16th century. The oldest parts of the tower date back to the 15th century. The view from the tower over the red roofs of the city, the hills of Svanninge Bakker, as well as the Southfunen Archipelago is breathtaking. Listening to the melodies from the largest glockenspiel on Funen is a pleasure that takes place every day at 8 am, 12 noon, 4 pm and 8 pm. Throughout summer, the city watchmen start their rounds from the bell tower at 9 pm from July 3 to August 27. The western gate at the street Vestergade has been built around the year 1400 and is the only one, out of 3 presumed city gates in Faaborg, which has survived. In Denmark one can only find a similar medieval city gate in the city of Stege on the island of Møn.
Museums
One of the most beautiful ar museums in Denmark - an architectural gem presenting the funen artists, who lived here and painted sceneries from the nearby surroundings of Faaborg - Faaborg Museum. The Faaborg Gaol Museum - at the town square in the middle of Faaborg lies the town´s former gaol and town court; a building nowadays housing the Gaol Museum. Here you can experience a closed world normally hidden behind bars and fences.
Castles and manor houses
On Funen, ther are 123 castles and manor houses. Not all are open to the public but can be armired from the street. Some of the castles near Faaborg have played an important role in the history of Denmark. Egeskov is for the whole family an experience.
Indirizzo