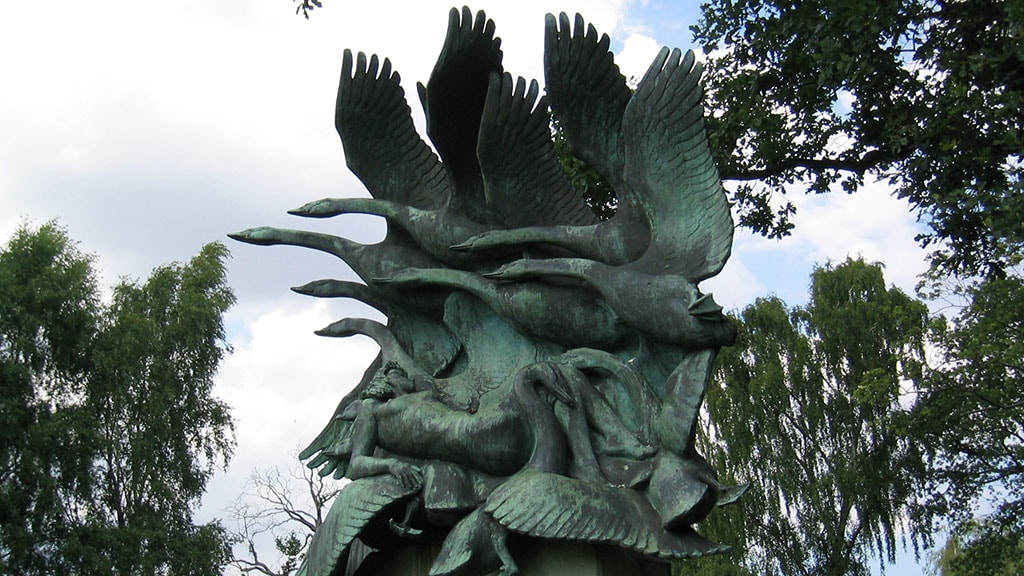 Foto: VisitOdense
Attractions
Monuments
The dynamic sculpture shows the 11 brothers and their sister, Elisa, who is lying naked on the swans’ wings, as they fly away. The tale of “The Wild Swans” tells the story about a king, who remarries a wicked queen, who out of spite cast a spell and banishes her 12 stepchildren. The 11 brothers are turned into swans, but the good-hearted Elisa, the only girl, is too good to be bewitched. The dedicated Elisa goes through a great deal of struggle to help save her brothers.
Indirizzo

As Liisberg often created drafts of his sculptures in moulds, other versions of this sculpture have been found. Common for them all is that they all centre around portraying Elisa, surrounded by her brothers. The first draft was more textual compared to the final sculpture. The final sculpture has energy and drama, and the many outstretched necks and flight-ready wings give this sculpture a dynamic forward and upward striving.

This sculpture is created in bronze, and was first placed in The Fairy Tale Garden, but was later moved to Munkemose, and it was decided to put the sculpture on a high base, to emphasize that the swans were flying.

Fun fact: The sculpture was gifted to the city of Odense on April 2nd, 1955, as it was celebrating the 150th anniversary of the birth of Hans Christian Andersen. This anniversary was also the reason for choosing a motif from one of his many fairy tales.

Mostly known as Hugo Liisbjerg, the danish sculptor was an apprentice at the Royal Porcelain Factory in 1913-15, and later studied with Antoine Bourdelle in Paris in 1920. He mostly made animal sculptures in glazed stoneware and was known for his often realistic and dynamic design language.