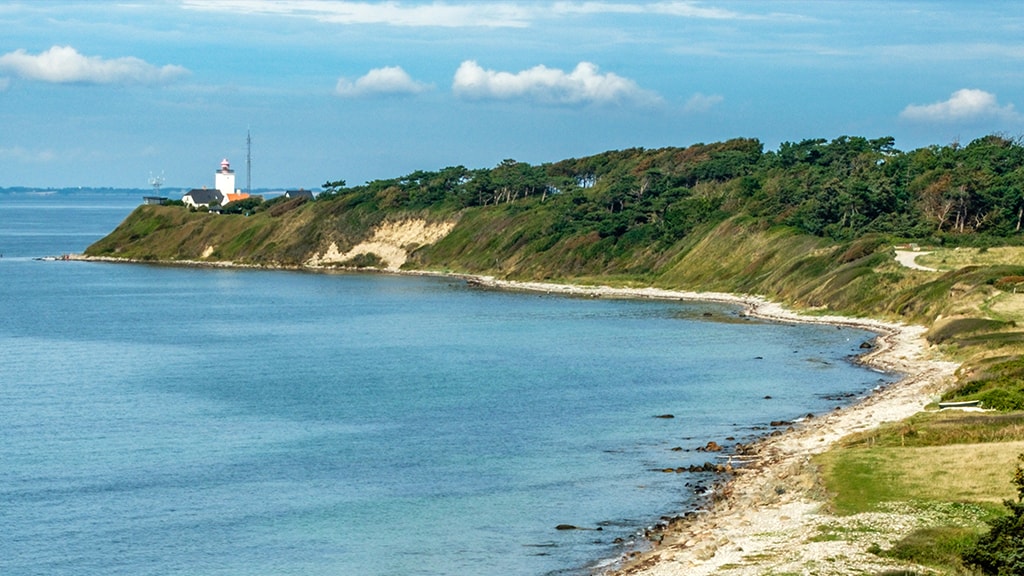 The Røsnæs peninsula juts out some 15 km from the Zealand coast. Its climate is among the driest and sunniest in Denmark.

The average annual rainfall here is approx. 500 mm, compared to the Danish national average of 600 mm.
Røsnæs also enjoys around 100 more hours of sunshine a year than the national average. These conditions give the Great Belt a special climate and a countryside that is home to an unusually large number of steppe plants.

In addition to this, several species of animals occur here which are usually only found further to the south.

The Røsnæs Peninsula is a bank of clay, sand, gravel and rocks pushed along in front of a glacier during the last Ice Age, 15,000-20,000 years ago.

The glacier pushed huge volumes of rubble in front of it, leaving a series of lateral moraines across the Great Belt from Zealand to Funen.

Røsnæs forms an eastern part of the lateral moraine which continues under the sea to the northern tip of Funen.

The red and green plastic clay is highly conspicuous in the cliffs along the coast. It originates from the Tertiary period, 50 million years ago.

It is a very pure, rich type of clay, malleable when moist but hard as stone when it dries.

Most of the layers consist, however, of stony moraine clay and Ice Age melt water gravel.

Along the beach you will find lots of different types of rocks that were washed out of the Ice Age strata. Many of the rocks are what are known as indicator boulders. Most of these originated in Dalarne in Sweden and in the Baltic region, such as Bredvad porphyritic and Åland boulders. Indicator boulders from the area around the Norwegian capital, Oslo, are also found, e.g. rhombus porphyritic.