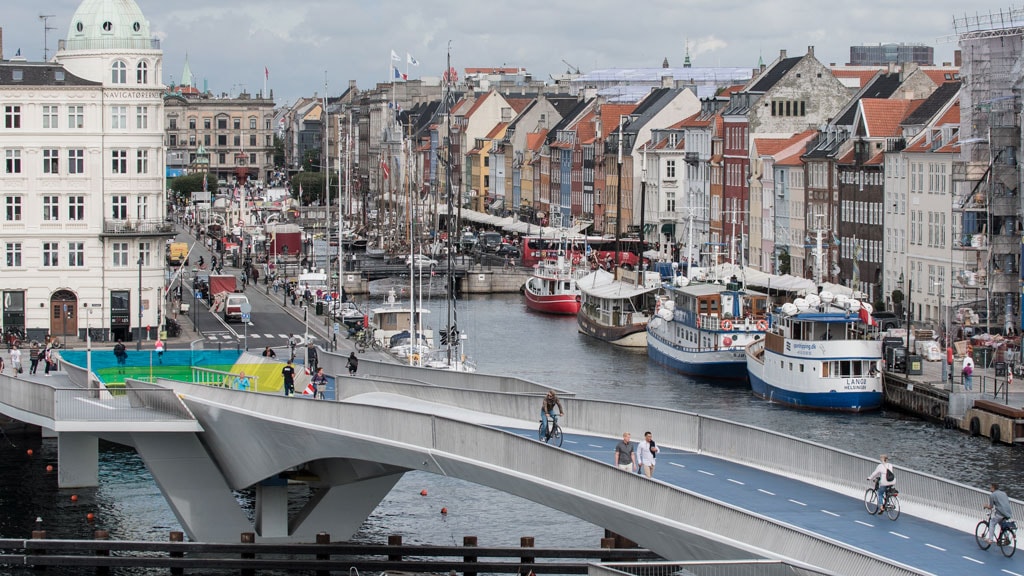 Immediately after its opening in 2016, the Inner Harbour Bridge got a heartly welcome by Copenhageners and guests of the city walking or biking from Nyhavn to Nordatlantens Brygge across the harbour.

With its very central location right in the heart of Copenhagen, more specifically from the end of Nyhavn, the 180 meters long bridge constitute a much need connection between two busy parts of Copenhagen: The city centre and Christianshavn/Holmen.

No matter which side you come from, make sure to stop at the designated platforms on the bridge to take in the views of the harbour area and down Nyhavn canal.

The Inner Harbour Bridge is also called “The Kissing Bridge” due to its resemblance of a kiss, as it retracts to let ships pass, and then connects again in a calm, horizontal, sliding move. This is a rather special design for a harbour bridge as opposed to the more common vertical lift bridge design seen on Knippelsbro further down the harbour canal.
The Inner City Bridge concludes the final step of the Harbour Circle, which is a series of routes for cyclists and pedestrians to explore and enjoy Copenhagen’s offerings along the harbour front.