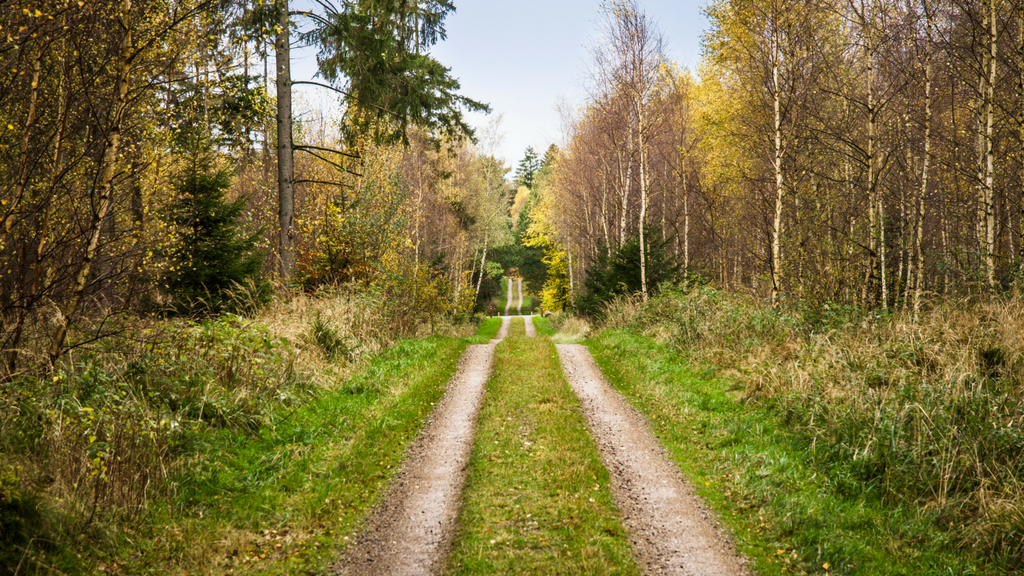 The Par Force Bicycle Route 110 guides you through The Great Deer Park and introduces you to some of the areas and special places that help make the forests and roads UNESCO world heritage.

So jump on your bike, get out into the forest and enjoy some of North Sealand's world heritage.

You can find a PDF (DANISH) with the bicycle route and map here, or go to the tourist information office in Hillerød or one of the other tourist inspiration places in Hillerød to find the map.

1. Præstevang and the Isle of Imagination

The suffix 'vang' is part of many Danish place names and is an expression for a grazing area, most often on the outskirts of a village. Præstevangen (The Priest's Clearing) dates back to 1573 where Frederik II gifted his priest Fjelkinstrup Farm as his official residence. Præstevang Church is found on Tamsborgvej, but can be seen on route from Københavnsvej (Copenhagen road). The lakes in Præstevang are all dammed in to lead water via canals to the Castle Lake. Today the water is diverted under the city's streets from Teglgårsdssøen Lake. In 1859 on the Isle of Imagination, in the largest of the lakes, Brededam, Frederik VII built a small royal mansion. The King and Countess Danner stayed there and guests where, among other things, invited to fish in the lake. Even though only one gabled is left from the mansion it is still a nice space to enjoy a romantic break on the route. See directions on stones from the route north of Funkevej.

The original King's road (Kongevejen) to Copenhagen was built by Frederik II and continued along Teglgårdsøen and the channels out through the current Ny Hammersholt. The road was only to be used by the king. From the 1790s the common citizens were allowed to use the road. The bend on Batzke's hill is due to a restructuring of the road. It is also here that the King's Road / Copenhagen road today ends at the Castle Gardens.

3. The King's Star and the Compas Stone

The highlight of the trip is the King's Star, where the king waited for the moment when the deer had been stopped and was to receive the final blow with a hunting dagger. The road system with the eight radiating roads is very well preserved. This also includes the numbering of the roads, which by use of numbered stones was easily understood by foreign hunting guests. The stones can be found at the King's Star and by the intersections that connect the quadratic road system. It is a carefully mathematically executed road system for par force hunting, and probably the best preserved of its kind in the world. In the middle of the star, you find a special stone with a compass rose and Christian V's monogram engraved upon it. Here there are tables and benches where you can relax. You can expand the trip by heading out through any of the roads, for example out the 2nd and return by the 3rd, and so on. It is good for your health and gives a more encompassing impression of the geometry in the system. Alternatively, you can follow the 4th road and continue along Skydebanevej to the Nature café in Kirkelte.

Bicycle down Batzkes hill and enjoy the sight of the castle and the castle lake to one side and the Baroque garden to the other. The Baroque garden is originally from the 1720s during Frederik IV's rule, and it was built by garden architect Johan Cornelius Kreiger. Just like the par force hunting landscape the garden is an expression of the absolutist King's power over nature. The Baroque garden has four terraces. The bottom terrace consists four royal monograms set in box hedges, followed by bushes and sculptures. The symmetrical axis towards the castle consists of cascades. Head up through the garden to the oval lake, which when seen from the central axis looks like a round lake. The optical illusion is created by narrowing paths to make it look like it continues out into the landscape. Finish your trip at Café Havehuset, when you can see a model of the garden.