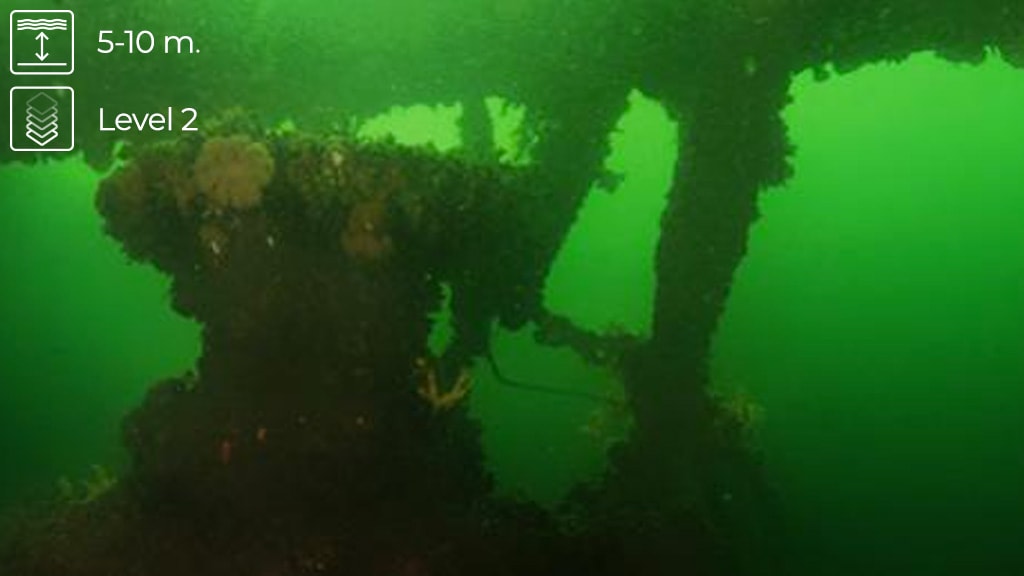 In front of Valdemars Slot on Tåsinge, on the bottom of Lunkebugten bay, lie 4 German motor-torpedo boats, scuttled by the Germans in May 1945. Perhaps two more are also out there - they are still being looked for.

Safety
You must always fly the A-flag when diving, a boat handler should remain on board when divers are in the water.

Visibility
Best in the colder months of the year - less good in summer.

About The E-boats (motor torpedo boats)
These motor torpedo boats were equipped with two 53.4cm torpedo tubes close to the bows, a 20mm cannon mid-ships and 4 machine guns. However the weapons and other large items were removed by the Germans before they sank the ships with explosives.

These boats were powered by three 16 cylinder Mercedes-Benz diesel engines, each producing 2500 hp. Together the ship could produce nearly 7500 hp! They could reach a speed of 36 knots, and when using special small rudders to the side of the main rudder to produce what is known as the Lürssen effect, they could achieve even higher speeds.

Sea life around these wrecks is limited, but in the winter months it is possible to find some beautiful nudibranchs. The lack of marine life does not detract from the dive however, as these wrecks have plenty to offer. There are many details that can still be seen on the wrecks, including hatches, engine parts, railings, pipes, torpedo tubes, bollards and much more.

The shallow depth - max. 10 meters makes this site suitable for all divers. However you must make allowance for the very soft sea bed, visibility can be ruined if it disturbed too much. Therefore divers should have good buoyancy control.

The four wrecks all lie within 1 square kilometre, making it possible to dive on three of them in one day. You can dive on these wrecks all year round, and even though some of them are partly broken up, and others are missing their torpedo tubes, they are really good dives.

The wrecks can be quickly reached by boat, and the district is reasonably sheltered from the wind.